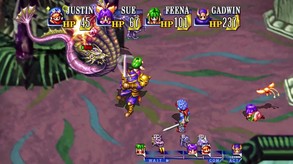 GRANDIA HD Remaster is out now! Celebrate its exciting adventures once again!

GRANDIA tells the story of Justin, the protagonist, and his companions in a race against the evil Garlyle Forces to uncover the long-lost secrets of an ancient civilization. Experience the game that became an instant classic and is considered to be one of the most influential RPGs of all time.

Originally created by Game Arts, developers of such classics as the Lunar series, GRANDIA was met with wide critical acclaim when released for the SEGA Saturn in 1997 and PlayStation® in 1999. GRANDIA recieved numerous awards including GameSpot Editor's Choice, IGN Editor's Choice Award and an Award for Excellence from the CESA AWARDS '97, currently known as "Japan Game Awards".

Besties
Sue has joined the party.

Brilliant!
Acquire the Horn of Knowledge.

Bringing Down the Orcs
Defeat the Orc King.

Going Down
Escape the Grandeur and General Baal.

Gift of the Gods
Find the Sacred Nectar.

Growth Spurt
Level up for the first time.

Professional On Board
Become adventurers with Feena.

Spaced Out
Arrive in Alent.

Beneath the Spooky Seas
You sank the Ghost Ship.

Swab Boss
Do a good job swabbing the deck.

The End is the Beginning
Reach the top of the End of the World.

Train Robbers
You stole a train?

Wrecked in the Ruins
Defeat Ganymede.