Gods Will Be Watching

Gods Will Be Watching is a minimalistic “point and click thriller” centered on despair, commitment, and sacrifice as players face intriguing puzzles and tough decisions that will affect their entire crew’s wellbeing. 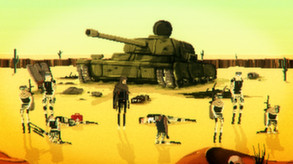 Gods Will Be Watching is a minimalistic “point and click thriller” centered on despair, commitment, and sacrifice as players face narrative puzzles and moral dilemmas that will affect both the lives of your team and the people you’re are sworn to protect. Set against the backdrop of an interstellar struggle, Gods Will Be Watching follows Sgt. Burden and his crew in six tense chapters from hostage situations and wilderness survival to biological weapon prevention and agonizing torture scenarios. Each decision is crucial and players will need to choose between the lives of their team and the saving the world from genocide. There's no good or evil, just decisions, with only you and the gods as a judge to your actions.

We're not terrorists
Keep all the hostages alive

F**k the police
Don't negotiate with the guards

Stick together
Don't use the break room

We've been through worse
Keep Burden & Jack in one piece

I'm not a snitch
Don't confess a single time

There are still things that bug me...
Tell more than 8 successful lies

The Doctor
Keep everybody alive

Human Experimentation
Discover the cure in less than 20 hours

Adrenaline Rush
Have a character's performance over 250%

Marvin loves you
Keep everybody alive

Sgt Burden
Give all speeches successfully

The Engineer
Repair the radio in just a week

BR4ND-0N
Have more than 15 bullets when rescued

Not on my watch
Reach the camp with 7 members alive

Quickstep
Never use more than 3 hours to travel between zones

Mission Accomplished
Reach the camp before the estimated time of departure

Let's talk about it
Don't shoot a single bullet

More than words
Complete the level without persuading anyone

Moral Dilemma
Don't use the kid

Liam Ferohn-gau
Get to the peak with everybody alive

Xenophobia
Reject all the shrine offerings

Winners don't use drugs
Don't use the doctor's shots on anyone

Speed climb
Get to the peak in less than 32 turns