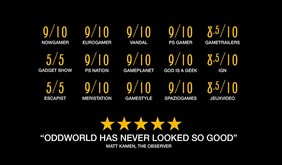 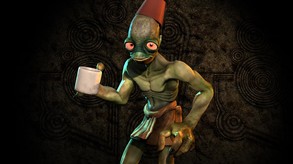 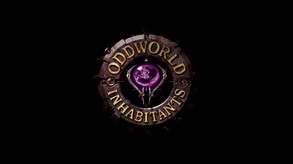 Struggling with Abe and the controls?

Tip: One of the quickest ways to make the controls in New 'n' Tasty a little easier is by switching on the two 'old school' control toggles, which are off by default. These tighten up Abe's movement and make lateral hops much easier to pull off.

Once on, Abe will no longer run without the player pressing the 'run' button, and will hop to the side rather than straight up, making mines easier to leap over and distances easier to judge. 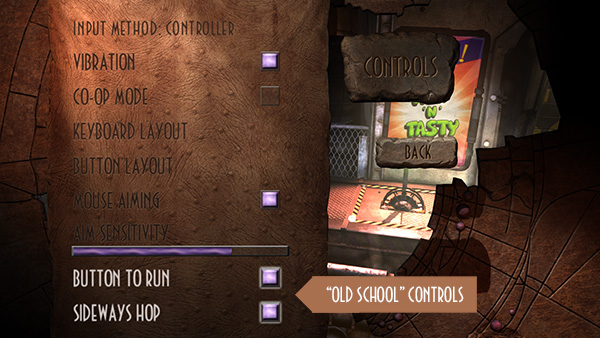 To remap a controller, ensure the "Input Method" is set to Controller, and then go to "Button Layout" and select "Xbox 360" at the top to bring up a dropdown. From the dropdown, select "Custom" and then remap as needed.

Once a happy floor waxer in Oddworld's biggest meat processing plant, Abe stumbles across his boss's secret plan to turn the factory's slave labor force into the latest in the RuptureFarms Tasty Treats line of novelty meat snacks. Abe now has to save his own skin from the grinders, but simply escaping the flesh farm is only the start of his Oddysee - for many dangers await Abe on his journey to discover his destiny.

Analog controls offer more subtle control over Abe, and new tricks like free aiming, the ability to drop grenades behind you and also sneak whilst crouching open up new avenues for stealthy tactics and inventive speed-running. Optional 'Old School' controls bring back hopping and digital movement too, so the Oddysee purists can get started with some familiarity.

From the murky grime of RuptureFarms to the expansive native lands of the Monsaic Lines, through to the vast temples of Scrabania and Paramonia, Oddworld: New 'n' Tasty boasts new areas, subtle gameplay changes and a few surprises. Fans will recognise the huge meat grinders, Scrab holding pens and cavernous caves, but there's more than enough that's new here to keep you on your toes.

Close Encounters of the Slig Kind
Kill a Slig with any kind of mine.

Close Shave
Escape a Scrab by the skin of your loins.

Cooked To Perfection
Destroy a Chant Suppressor with a cooked grenade.

Disciple of Odd
Rescue a quarter of all the Mudokons.

Don't Get Mad: Get Elum
Ride Elum for 200 meters without stopping.

Escape Fartist
Escape from RuptureFarms without Abe being spotted by any Slig.

Hit the Deck
As a possessed Slig, fire over the head of a cowering Mudokon.

Mine Games
Deactivate 3 toggle mines in a row with no mistakes.

New 'n' Hasty
Rescue every Mudokon with an overall Best Time of 3:00:00 or less.

Nine-Tenths of the Law
Kill 9 Sligs with a single possessed Slig.

No Place Like Home
Find and use all the secret entrances to RuptureFarms.

Odds and Rockers
Bounce a rock off a wall and on to a mine.

Oops…
Fail to observe your surroundings.

Rockin' Mudokon
Kill a bat with a rock.

Shepherd of Odd
Rescue half of all the Mudokons.

Speed of the Mudanchee
Run from a Scrab for 25 meters and survive.

Under New Management
Drop 2 Sligs down a single trapdoor at the same time.

Valve Time
Turn off the gas with more than 30 seconds to spare.

Why Do Birds Suddenly Appear…?
Have Abe die in 15 different ways.