Travel back in time to change fate itself, in this beautifully crafted story-driven adventure, inspired by classic 90s action-platformers. Join timekeeper Lunais on her quest for revenge against the empire that killed her family, using time-bending powers to explore a vast, connected world. 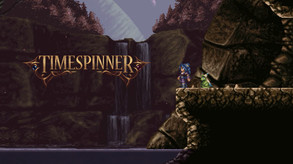 With her family murdered in front of her and the ancient Timespinner device destroyed, Lunais is suddenly transported into a unknown world, stranded with seemingly no hope of return. Using her power to control time, Lunais vows to take her revenge on the evil Lachiem Empire, but sometimes the course of history isn’t quite as black and white as it seems...

Explore an intricate, connected world with beautifully drawn and detailed pixel art environments. Traverse between the barren present and luscious past of Lachiem, collecting elemental magic orbs and combining their power to destroy enemies with blades and spells. Befriend mysterious creatures called Familiars, such as the adorable dream dragon Meyef, and train them to aid you in battle. Test your skills and timing with intense boss battles, and you venture forth to take on the Emperor himself!

The Timespinner
Achieve all possible feats on the same save file.

Conqueror
Defeat the ruler of Lachiem.

Her Story
Collect all Memories.

Passive Ring
Have an Alchemist make you a new Passive ring.

Spell Necklace
Have an Alchemist make you a new Spell.

Explorer
Discover 100% of the map.

Silent Archaeologist
Obtain an Orb without breaking its pedestal.