Four Last Things is a point-and-click adventure game made from Renaissance-era paintings and public domain recordings of classical music. It is about sin, and the Four Last Things – Death, Judgement, Heaven and Hell – and strives to be intelligent and ridiculous in equal measures. 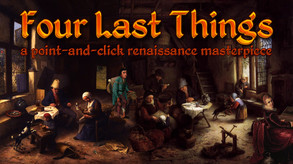 In the beginning God created the heavens and the earth. God saw all that he had made, and it was good. Then the Lord God formed a man from the dust of the ground and breathed into his nostrils the breath of life, and the man became a living being.

'Ooops,' said god, seeing he had created a fool. But before he was able to remedy his error, man spoke;

'No backsies!' he chirped, and scuttled off into the forest.

Four Last Things is a point-and-click adventure game made from Renaissance-era paintings and public domain recordings of classical music. It is about sin, and the Four Last Things – Death, Judgement, Heaven and Hell – and strives to be intelligent and ridiculous in equal measures.

It's kind of like if Monkey Island had been made in 16th century Flanders, by a time-travelling Monty Python fanboy...

Forbidden Fruit
You must not eat fruit from the tree that is in the middle of the garden, and you must not touch it, or you will die. Genesis 3:3

Pride
When pride comes, then comes disgrace, but with humility comes wisdom. Proverbs 11:2

Envy
A tranquil heart gives life to the flesh, but envy makes the bones rot. Proverbs 14:30

Gluttony
Be not among drunkards or among gluttonous eaters of meat. Proverbs 23:20

Greed
Whoever loves money never has enough; whoever loves wealth is never satisfied with their income. Ecclesiastes 5:10

Wrath
Fools give full vent to their rage, but the wise bring calm in the end. Proverbs 29:11

Lust
So I say, walk by the Spirit, and you will not gratify the desires of the flesh. Galatians 5:16

Jam Session
You strum away on your harps like David and improvise on musical instruments. Amos 6:5

Art Thief
Treasures gained by wickedness do not profit, but righteousness delivers from death. Proverbs 10:2

Art Critic
Examine me, O LORD, and try me; Test my mind and my heart. Psalm 26:2

Master Sculptor
You have an abundance of workmen: stonecutters, masons, carpenters, and all kinds of craftsmen without number, skilled in working. Chronicles 22:15

Alcoholism
And be not drunk with wine, wherein is excess; but be filled with the Spirit. Ephesians 5:18

Riddle Me This
I will open my mouth in a parable; I will utter dark sayings of old. Psalm 78:2

Charitable Donation
And if I give all my possessions to feed the poor, and if I surrender my body to be burned, but do not have love, it profits me nothing. Corinthians 13:3

Leap of Faith
For God so loved the world that he gave his one and only Son, that whoever believes in him shall not perish but have eternal life. John 3:16

Eternal Damnation
Be sober, be vigilant; because your adversary the devil, as a roaring lion, walketh about, seeking whom he may devour. Peter 5:8