You're a spec ops operative with a mission to infiltrate the office of GeneWeaver, a biotech research corporation. Things went terribly wrong: an experimental virus broke out of containment, turning all the residents into a crazed abominations. Deal with the situation - prevent a global pandemic! 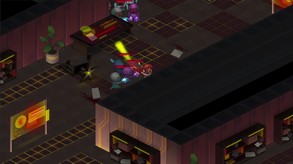 This game is a 2D top town shooter which principal gameplay feature is a special shooting mechanics. Your weapons fire tothe rhythm of the music: one shot at every beat, so pay your attention to music while surrounded by the enemies!
You're a single operative with a mission to infiltrate the office of GeneWeaver, a biotech research corporation. Something went terribly wrong there: an experimental virus strain broke out of containment on one of the floors, so now the building is full of disgusting mutated abominations that were just ordinary people several hours earlier. Looks like you don't have a choice but to fight them if you want to stay alive!
Your primary goal is quite simple: deal with situation, following by the instructions from your HQ, and eliminate the threat of global pandemic. To achieve this, you have to pass through several totally infested floors.

Features of the game:

Out on Limb
Killed for the first time

Risen from the Dead
Killed 50 times

Lord of the Bones
Killed 100 times

Turret Summoner
Collected all the turrets at the level