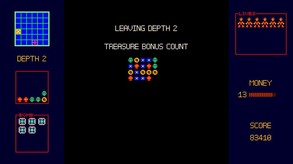 Frantic Dimension is a retro twin-stick shooter inspired by the earliest twin-sticks, 'Space Dungeon' and 'Robotron 2084'.

You are a treasure hunter Jason Allen, who had been teleported to the alternative dimension where aliens called 'Yadcian' are living. The aliens are chasing you to eliminate the intruder, now you have to collect alien treasures and escape The Yadcian fortress with the stolen powerful prototype weapon 'Million'.

You can also use game controllers to play this game.

You have to explore The Yadcian fortress and collect treasures before leaving the level. Each levels has 36 rooms and 25 treasures. Rooms usually have randomly placed walls and enemies, but some rooms have completely opened area with enemies called 'Corner zappers' or 'Corner cannons'. If you escaped the level, your treasures will be exchanged for your score and money. You get an extra life in every 10000 score and an extra smart-bomb when the money reaches 12.

READY TO BLAST
READ THE INSTRUCTION

YOU ARE A RICH MAN !
COLLECT ALL TREASURES

YOU WERE A RICH MAN !
LOSE ALL TREASURES

PERFECT HUNTING
LEAVE WITH ALL TREASURES

NOT SO ROUGH
LEAVE DEPTH 3 WITH 15 TREASURES

NOTHING FURTHER
LEAVE DEPTH 5 WITH 15 TREASURES