Offendron Warrior is a retro arcade that combines shooting and defense. Your objective is saving Offendron civilians in the planets from the group of enemies, who are trying to spread a virus that turns Offendrons into mindless killing machines and eventually destroy the whole planet. 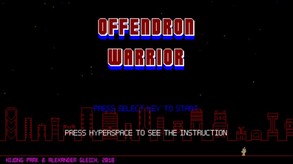 Your objective is saving Offendron civilians in the planets from the group of enemies, who are trying to spread a virus that turns Offendrons into mindless killing machines and eventually destroy the whole planet.

Each planet has 10 civilians. If you managed to save all of them from 4 waves of attack, you'll go to the space and fight with lots of enemy fighters. After that, you'll jump to another planet to save another 10 civilians. But if you lost all civilians, you'll have to prepare a hopeless survival from your infected friends in space!

Offendron Warriors can transform into Interceptor or Offender. In Interceptor mode, you can fly very quickly to save Offendrons or fight with enemy fighters. In Offender mode, your thrust speed significantly decreases but you can fire your laser much faster and you can fly up or down much quicker. (Manually pressing the button fires the laser faster than just holding it.) Offender mode is recommended for fighting with large amount of enemies or doing preciser movements.

Somewhere in the space, there were robotic aliens called "Offendrons". They attacked and colonized other planets to get the energy source they need for living.

In the year 3045, Offendrons has arrived at the Solar System and invaded the Earth, to build their 255th colony. Within a year the Earth had successfully taken by Offendrons.

However, the mankind didn't give up. Some people escaped to the base on Mars and developed a virus that turns Offendrons into a brainless killing machines that can only think about destroying other Offendrons.

3 years later, humans started their revenge with countless amount of war drones and space fighters. When the fate of Offendrons came to a crisis, the Offendron Warriors—those who are capable of greater firepower and transformation for various combat situations—has appeared to save their own kinds.

Do you remember love ?
Save the last Civilian and carry him/her until the wave ends in more than wave 5.

I don't remember love
Save the last Civilian and kill him/her yourself in more than wave 5.

Lander Inbound !
Find a lander and kill it in Attack wave 32.

Lives are important
Get 200,000 score without dying.

My hero
Finish the attack wave by capturing the falling Civilian.

Offendron Ladder
Capture 6 Civilians at once.

Rescue Expert
Save 15 Civilians in the wave.

Return to victory
Get 3 lives again after having 1 live with more than 100,000 scores.

Road to the master
Get to 25th wave.

Sensible Shooter
Kill all other enemies without touching 3 Carriers.

Space Itano
Launch 25 missiles at once.

Telefrag !
Telefrag an enemy with Hyperspace.

Transcending space
Get into the warpgate.

Warpaholic
Warp 4 times in one game.