WARSAW is a challenging turn-based tactical RPG set in an occupied capital during WWII. Pick your heroes. Select salvaged arms. Navigate historic streets. Stand up to occupying forces. And try to survive the 63 days of hell in this historically accurate portrayal of Poles fighting for their city. 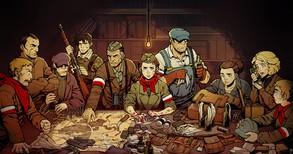 Use everything at your disposal to help a team of accidental heroes survive the onslaught in their home city and overcome tremendous odds stacked against them in this tactical rpg set on the streets of occupied Warsaw of 1944.

Enlist the help of men and women, soldiers and civilians, the young and the old and use their unique skills, expertise and abilities to challenge the enemy. Meet people from all walks of life united in their attempt to overthrow the German occupiers.

Create a mix of versatile skills that will allow you to flank your enemies, detonate obstacles, snipe stragglers and push or pull enemies into the area where your carefully planned attacks deal the most damage.
Make sure your Heroes are stacked with the right weapons salvaged, obtained from the enemy or air drops. Develop them using medal system to unlock a unique set of skills, and construct the best team of all the Heroes – both joining the forces and enlisted in the Hideout in exchange for the collected resources.

Make your way on the carefully reconstructed map of Warsaw of 1944, encountering both historical and random events that immerse you in the story of the city that valiantly stood up to the Nazi oppressor. Patrol the streets fulfilling the orders issued by HQ, discover facts about the past of your Heroes and decide when to fight, and when to withdraw.

Learn all the strengths and weaknesses of your assigned team. Find the best combination of personnel, weapons and skills to overcome more and more lethal enemies thrown to quell the uprising. Fight your way through infantry, specialized troops, heavily armed units, special ordnance and armored vehicles. Make your choices in the many story infused events and live with their results. And don’t let the ever increasing ferocity and intensity of forces thrown your way stop you from your one goal. Turning your Heroes into survivors. Not victims.

The Soldier
Recruit Berling's Soldier for the first time.

Sorrow
Lose a character in battle.

The Unforeseen
Lose a character due to an event outcome.

Fruit Vendor
Collect every type of Grenade in the game.

Rockets Away
Collect every type of Heavy Weapon in the game.

Belloc's Maxim
Collect every type of Machine Gun in the game.

Spitting Lead in a Business Manner
Collect every type of Submachine Gun in the game.

Pistol Packing Mama
Collect every type of Pistol in the game.

The Ocelot
Collect every type of Revolver in the game.

Mr. Häyhä
Collect every type of Rifle in the game.

The Complete Record
Unlock all entries in the Codex.

Picking Up the Pieces
Lose one district due to low Morale.

The Doctor
Recruit the Doctor for the first time.

Flawless Victory
Complete a mission with all insurgents at maximum Health.

World Coming Down
Have only one district left standing.

Catching Up
Survive for 33 days.

A Straight Flush
Recruit every unique insurgent in the game at least once.

Triple Treat
Kill three enemies with a single skill use.

The Mechanic
Recruit the Mechanic for the first time.

The Scout
Recruit the Scout for the first time.

Once More Unto the Breach
Start a new game after being defeated.

The Officer
Recruit the Officer for the first time.

The Sapper
Recruit the Sapper for the first time.

Song of the Walls
Lose the Śródmieście district.

Tactical Retreat
Retreat from a mission.

The Turncoat
Recruit the Turncoat for the first time.

63 Days of Glory
Survive for 63 days with at least four districts still standing.